First, allow me to say that I enjoy the metaphor of the tacklebox much more than the toolbox when it comes to the process of writing as I’m experiencing it right now. In my mind I’m more fly fishing the streams of my subconscious, trying to use different techniques to tease out and catch the interesting tidbits. Maybe when I start up on the revisions stage I’ll start working on that fish with tools… turn it into a bionic amalgamation of flesh and machine (okay, the metaphor has taken an odd turn).

Anyways, one of the tools that I’m sharing today is something that I came upon while attending the gaming convention Gen Con this past year. I attended a workshop by a New York Times best selling author named Michael Stackpole. Stackpole is most famous for sci-fi novels, especially Star Wars and Battletech. I was originally introduced to him through a favorite podcast of mine, and one you should check out if you’re into genre fiction, The Dragon Page, several years ago. 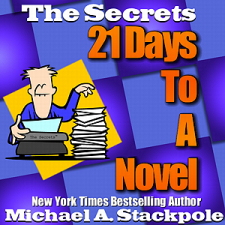 The workshop I attended was called 21 Days to a Novel and it changed the way that I thought about the process of writing. In a brief, one hour lecture, he detailed the process that he has come up with and uses for developing his own stories. I took as many notes as I could during his presentation but enjoyed the straightforwardness of his style enough to purchase the pdf that it was based on (you can find it here). The funniest part about his approach is that it seems so simple afterwards that you’re sort of left smacking your head thinking, I should have thought of this.

The basics are that you sit down each of 21 days and write just a tiny little bit based around a prompting question. The prompts effectively lead you from characters to the conflicts and similarities they have all the way out to how they interact with the world that you construct around them. For me, being a frustrated writer for years and years, this was a nice breakthrough in that it showed me a process that an established author uses successfully. It also taught me that there are two schools of writing thought, the fly-by-the-seat-of-your-pants writer and the planning writer. For so long I had thought, well, I’ll just sit down and write, inspiration will hit me every time I get in the zone. But the zone became this elusive beast that I’d spend hours trying to establish and then give up in frustration. I suddenly realized that even having a rough sketch propelled me forward and that there were plenty of gray areas for inspiration to fill in the blanks along the way. I also don’t strictly hold myself to the outlines I come up with very strictly. If a character decides to do something unexpected, I let it happen and see where they go with it.

I think that 21 Days kind of found me when I was at just the right mental spot, ready to take on a task that is daunting. If you feel like you’ve got a story to tell but are struggling with figuring out the writing process,  I recommend it. By the way, you probably won’t have a full novel after 21 days, but you’ll have a good number of the pieces that you need to create that novel.

What tools, lures, or other such things have you used on your writing excursions to drum up productivity or inspiration?