What inspires you? Where do you get story ideas?

These questions always intrigue me about different authors and creative folks. Sources of inspiration are nearly as variable as styles of writing. It seems in some way, we all have our own voice when it comes to being inspired. Stephen King found his initial inspiration from the cover of an H.P. Lovecraft short story collection. Henri de Toulouse-Lautrec was inspired by the night life of Paris and by the grittier, bohemian and less polished parts of life. Brian Eno and Peter Schmidt created a collection of playing cards, called Oblique Strategies, each containing a phrase to be used in the effort to break through blocks or think roundly about a situation that was causing a lack of productivity.

I pull my own inspiration from all over, sometimes I document my ideas using different web apps, like Springpad or Tumblr. Moments of inspiration for me are triggered by an odd thought that bubbles up to the surface. I have a tendency to spend a lot of time lost in my thoughts, which is why I also have a tendency to be more quiet, I’m just mulling things over. Usually the thoughts I’m mulling over aren’t even all that interesting, they just keep popping up and I examine each one and then let it pass. Occasionally though something hits me at such a strange angle that I’m left scrambling to write it down as quickly as I can before it goes away. I think most people experience this but usually let it pass. An aside, Tom Waits told a pretty funny story to Elizabeth Gilbert in an interview once about the inopportune moments that the muse decides to strike us. He was driving on the freeway when a melody popped into his head. Without any way to capture it, he looked up at the sky and said, can’t you see I’m busy right now? Go bother Leonard Cohen. Read the full quote over here.

Photos are a great source for mining story ideas from also… you can capture so much in a photograph and I’m always left wondering about the subjects or the situation. How did this happen? Why are these people reacting in this way? Etc. Creating the backstory, filling in the details of that world, even using a photo to figure out how a person feels about themselves… are they confident? What led to their being so confident? Here’s an example, Juliette just posted this photo to Facebook: 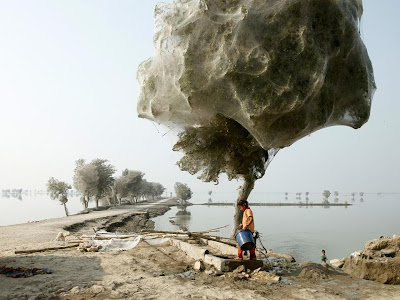 Without having read the caption, my mind instantly started thinking that (from the distance I saw this) there were a series of explosions and that maybe the person standing in front was, I dunno, carrying an apple bucket or something to try to make it look like they were trees, sort of impromptu art. Then I looked a little closer and read the caption, apparently there were floods here that drove all the spiders up in the trees and the flooding was so long term that the trees became cocooned in spider webs. That’s an incredible story in itself. Suddenly I’m imagining a place that has been ruined financially by a natural disaster and seeing this kid in the foreground with a bucket. Maybe he’s just fetching water. Or maybe he’s collecting the spider webs to act as a sieve for purifying the muddy flood waters. Or maybe he’s going to take them to a witch or shaman to have them make a coat that allows him to breathe underwater so that he can recover the body of his father whom he lost in the flood. the possibilities really do feel infinite.

Off of this, I’m going to start sharing my Tumblog, which I update from time to time with photos, sometimes a quote or whatever. They’re mostly sci-fi, horror and fantasy related images, obviously, since that’s what I’m writing. Anyways, you can find it here or up in the navbar of my blog.

So that’s my take, what do you do to keep yourself inspired and writing, painting, composing, etc?